I have been co-parenting for about 14 years. With this experience of co-parenting have come some challenges, struggles and personal growth. You see, co-parenting isn’t easy by any means and when you co-parent with someone who is completely the opposite of you, it’s quite frustrating to say the least. I have been co-parenting my sons for about a handful of years but I took what I learned from the first child into my co-parenting situation with the father of my sons. Since I have watched co-parents put the kids in the middle for so long, argue and fight consistently and place their own kids under the impression that they are not free to love both parents, I work hard to share tips on what has worked for me and what I have learned in the last 14 years. Today I am sharing co-parenting tips – how to handle opposite rules in other parent’s home as a means to guide you towards having happier, well-balanced kids who don’t feel guilty loving both parents. 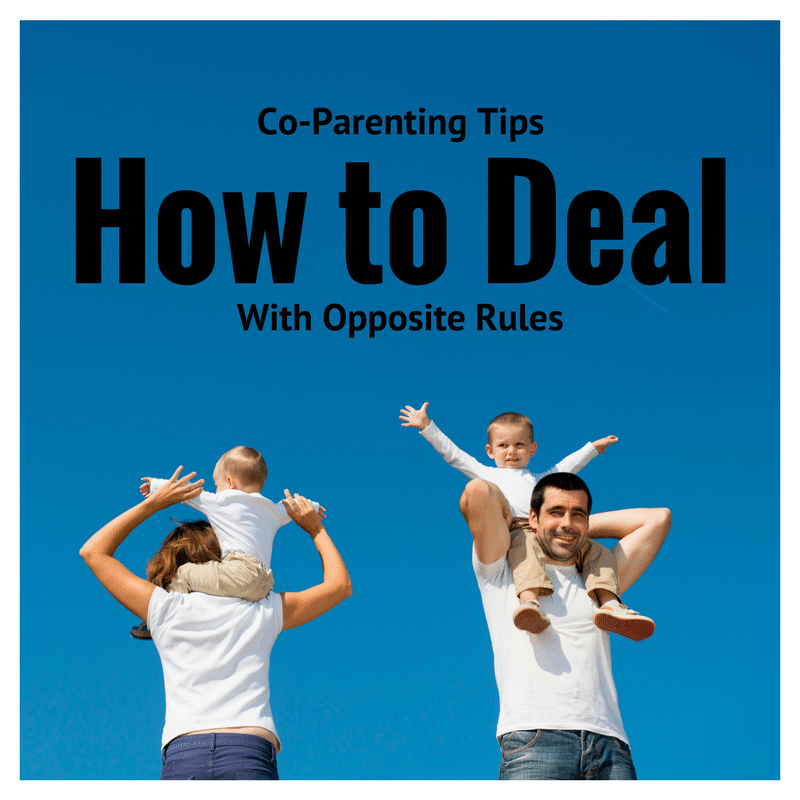 That may sound harsh and well it is meant to be. If you are co-parenting with someone who destroyed you emotionally it will be difficult to get over your emotions. I say it should take about two years to get over the hurt that was caused in the breakdown of that relationship. Once you hit the two year mark of co-parenting, you should have been able to work through the hurt and be a better co-parent to your kids. Take up to two years to see a counselor, work through demons from the relationship and figure out a way you can come to peace with knowing your ex hurt you but the kids shouldn’t pay for it. You are just as imperfect as your ex, so get over yourself.

Kids hear everything, even when you think the kids are not listening, they are! Learn to never utter a mean word about the other parent whenever the kids are awake. Part of co-parenting is working together to raise your children without harming their self-esteem and love for their other parent. While you may see fault in the co-parent, the kids do not see this. All kids see is that their Mom and Dad love them, care for them and are there for them. Allow your kids to learn the faults in their parents on their own, it is not up to you to brainwash the kid to hating their other parent. If you must vent about the co-parent do so on a kid-free weekend/night or when they are fast asleep and there’s no chance they will hear you.

Accept the Other Parent’s Rules

You and the other parent will rarely have the same exact rules. Learn to accept that the other parent has their set of rules and it is not your place to step on their toes. If your kids come home saying that they are allowed to do something at their other parent’s house and you are not okay with it, set up a meeting to discuss this concern with the co-parent in a way that leads to resolve. When the co-parent refuses to budget on their rules, simply accept it and teach your kids that Mom and Dad have different rules. That Mom and Dad live in different houses and that’s part of having two homes, they get to have different rules and it’s kind of exciting, right?! Make it fun but respectful. Encourage your kids to respect rules regardless of which home they are in.

Learn from the Co-parent

Sometimes you can learn from having different rules in the other parents home. In my scenario for example, my first born is my eldest of 3 children so how I treat her is different than her Dad because she is her Dad’s only child. Get what I mean? Each of us could possibly learn something from another because of our differences in our daughter’s “birth order” for each household. Take time to learn from your co-parent, each of you should still be able to learn something new in the parenting world without attacking. Sometimes the answer on how to handle opposite rules in the other parent’s home is to figure out why they have that rule, why they think that way and truly hear them out. You can still keep your own set of rules, but understanding why they have these rules will help you be a better co-parent to your kid. When you understand why the co-parent has this rule, you can better teach your kid to respect that rule because you have taken the time to hear why the co-parent has this rule.

There you have it a few ways you can learn how to handle opposite rules at the other parent’s home. Mind you, co-parenting is rarely as easy as I make it sound typing it out on paper but I am blessed in that I have one co-parent who I constantly have to comprehend where he’s coming from to try to respect and teach my daughter to respect him while the other co-parent and I can communicate, get on common ground and be peaceful at all times when it comes to raising our sons. The joy of having opposite co-parenting scenarios is that I can try my best to help others see how co-parenting doesn’t have to be a nightmare. You truly can find middle ground to make it work!