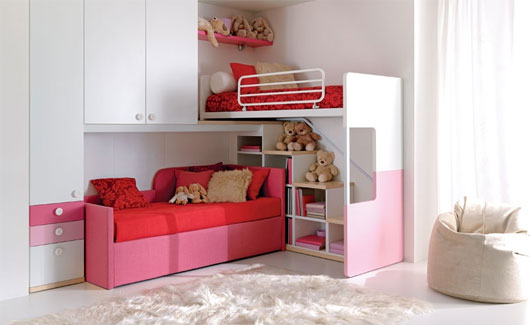 If you have more than one kid and your home isnâ€™t exactly a castle, it might be necessary for your children to share the same bedroom for a while. If thatâ€™s the case, and you want it to be a success, there are a few things that you need to do.

Here are some simple tips to ensure that your childrenâ€™sâ€™ room sharing is a success:

Children need privacy just like we do, which is why, if they have to share a room, you should make a real effort to create some personal space for them. Using double or triple bunk beds is a good place to start because it gives them their own â€™levelâ€™ where they can have a modicum of privacy while theyâ€™re in bed. Buying them their own separate dressers is also a good idea, as is creating zones in the room, perhaps by using curtains or dividers, to give them their own private area to do their own thing.

It can be tempting to change one or more of your childrenâ€™s bedtimes so that they sync up, but thatâ€™s not really fair, especially if one of the kids has a way earlier bedtime than the others. Youâ€™ll have far fewer tantrums if you honor existing bedtimes and perhaps, read stories in the living room, so as not to disturb the already sleeping kids, instead.

If itâ€™s impossible to get your young kids to nap in the same room because they are forever distracting each other and playing when they should be sleeping, simply have them nap in other rooms (if thatâ€™s possible) or perhaps consider setting up a travel crib in a closet, so that theyâ€™re sort of separate. Itâ€™ll save you the headache of having to constantly go up to them in a bid to settle them down.

Use a White Noise Machine

White noise machines are great at promoting a deeper level of sleep in people of all ages, but theyâ€™re particularly good for siblings who share a room because they can muffle sounds, like snoring, that siblings make, ensuring that the other kids arenâ€™t disturbed and can all get a good nightâ€™s sleep.

Be a Firm Parent

Depending on the age of your children, they may resist sleeping in the same room. If itâ€™s the only option you have, you need to be extremely firm with them, setting out the rules and ensuring that theyâ€™re enforced. After a while., the kids will adjust to their sleeping arrangements, and they will fall into line. So, work out how long youâ€™ll allow them to talk/play after going to bed, when itâ€™s time for lights out, how much noise is acceptable and make sure they know the score.

Have a Plan B

No matter how hard you plan for it, sometimes sibling room-sharing just wonâ€™t work out. One of the kids might be sick causing a bigger disruption than usual, for example. When that happens, itâ€™s important that you have a backup plan, such as a sofa bed or portable cot, which you can set up in another part of the house to ensure everyoneâ€™s needs are met until things get back on track.

Room sharing may be tough at first, but if you do all of the above, it should get easier with time, and actually, it will probably benefit your children, making them even closer than they might otherwise have been.