Willy Wonka and the Chocolate Factory is one of my all time favorite movies to watch with the family. I loved watching Gene Wilder in this film. This is such a wonderful movie to watch with the kids, if you haven’t yet let them experience Willy Wonka and the Chocolate Factory, you must put it on your weekend to watch list. There’s something new happenning with this movie though and today I am sharing that information with you …

Win Tickets to See Willy Wonky & a Chance to Meet the Cast!

In the spirit of “WILLY WONKA & THE CHOCOLATE FACTORY™” starring Gene Wilder, we have a wonderful Golden Ticket opportunity for you and your readers! Six lucky winners will win up to 4 tickets to see Willy Wonka and the Chocolate Factory Live-To-Film at the Hollywood Bowl! But that’s not all, a few extra-lucky winners will also win a meet & greet with members of the cast! The show stars John Stamos, “Weird Al” Yankovic, Finn Wolfhard, Elle King, and more! *Please note this does not include hotel, airfare, or transportation.

How to Enter to Win Tickets to See Willy Wonka

Submit a video – or a photo – that shows you’re the BIGGEST Willy Wonka Fan!

And have fun with it! You could….tell us about your favorite “Wonka” related memory, snap a selfie in a Wonka T-shirt…..show of your best Oompa Loompa Dance….sing your favorite song from the show….rap about it…create a poem about it…cover yourself in candy…..dress up as your favorite character….. Anything and everything goes!!!

Click here to learn more about the official contest, how to enter, and hashtags to use. 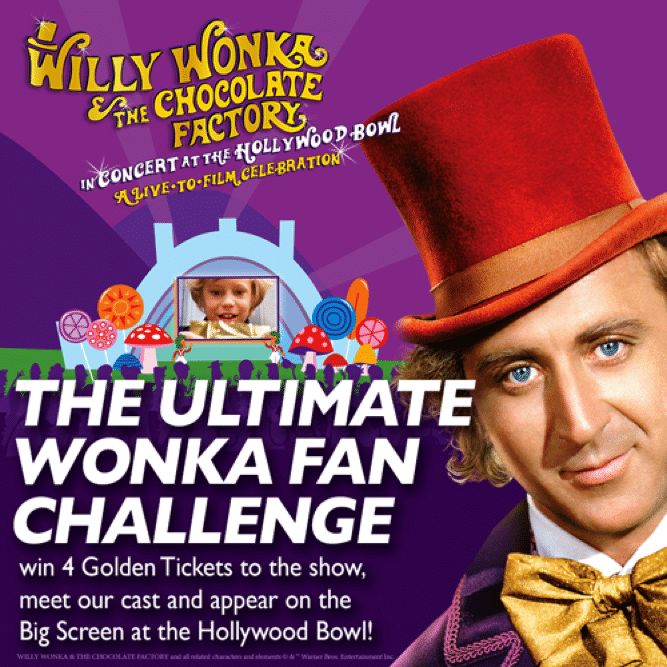 More About the Show

The singing cast includes John Stamos performing “Pure Imagination” as Willy Wonka, Finn Wolfhard (“Stranger Things,” IT) as Charlie, Giancarlo Esposito (“Breaking Bad,” “Once Upon a Time”) singing the role of The Candy Man, and Richard Kind (“Gotham,” Inside Out) as Grandpa Joe, with musicians Elle King (“Ex’s & Oh’s”) singing Veruca Salt’s “I Want It Now,” Ingrid Michaelson as Mrs. Bucket, and “Weird Al” Yankovic as the Oompa Loompas.

The experience will also be presented in SMELL-O-RAMA with guests receiving exclusive Scratch-N-Sniff Golden Tickets and will kick off with a costume contest hosted by original cast member Julie Dawn Cole, who memorably played Veruca Salt.

Doors will open at 6:30PM with costume contest to follow and the concert beginning at 8PM.